From Ashes to Magic Anthology

It’s when they creep out of the shadows that you should beware. The good ones will hold your hand when you’re having a nightmare; the bad ones BECOME your nightmare, seeping into your very soul and burrowing in the darkness until they’ve completely taken over.

Once you plunge into these pages, you won’t want to leave.

Hang on to your socks, because here is an excerpt from Sulfur Night for you to enjoy!

And the rule of the new gods dawned, ushering in an age of light. But no light can
completely wash away the shadows.

And so Stea was born, the midwife forced to drag the babe feet first into the world.
Her misfortune only grew from there, as she was born the daughter of Dasa, a man who
believed too fervently and lacked the intelligence to do anything but follow. By his own
confession, the harbingers of the new gods came in white cloaks and dragged
the swaddled infant from her wailing mother’s welted breasts.

Only when the Stea was securely settled into the whitewashed wagon did the
guardians realize she hadn’t cried. Not a whimper. The mother had screamed and
fought weakly against stronger arms as they had expected. But they had prepared for
an infant, who would cry until its throat grew horse and bloody and its red cheeks were
washed in tears.

Instead, here was the babe, the water of the womb barely dried upon its skin,
silent, watching the guards with keen eyes. Those eyes betrayed the tainted nature of
the child’s soul. Where there should have been white, there was only unholy yellow
encircling irises darker than black. The infant blinked and the guardians couldn’t stop
the involuntary shudder that slid through their bodies.

Want to read the whole story? The entire anthology is available in E-Book and Print Copies from Amazon! 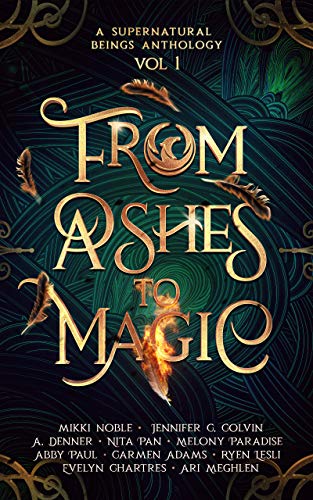