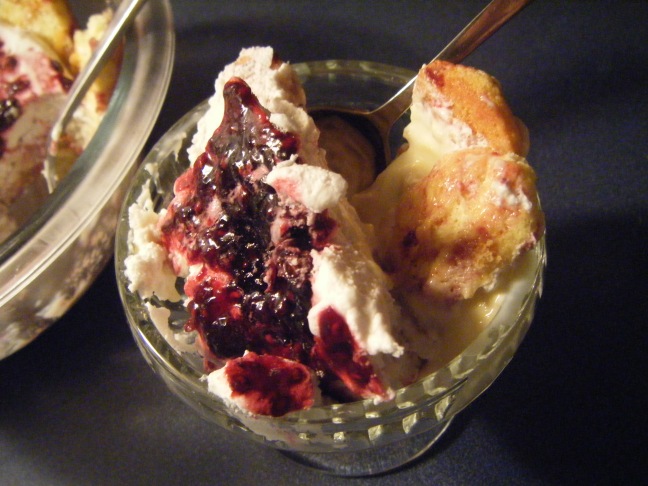 So in my last post, I made my first attempt at ladyfingers. Some of them came out better than others, but that is to be expected with any first attempt. What I realized after I saw all those lady fingers cooling on the counter, was that I had no plan on what to do with them! I decided to wing it, and the resulting dessert was trifle inspired, mostly because my husband said that lady fingers reminded him of the episode of friends where Rachel messes up the trifle by adding mashed potatoes and other ingredients from a different recipe.

RECIPE: I guess you could call it a Trifle
Makes 2 Bowls

DIRECTIONS:
1) In a pan, combine the the frozen berries with a tablespoon or two of sugar and a hearty glug of white wine. 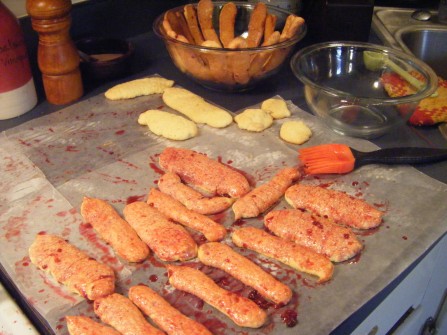 2) Once the berries have simmered into a sauce, brush the ladyfingers with the syrup so that it soaks into them.
3) In a pot, began heating a mixture of heavy cream and milk until warm.
4) Mix in a bit of sugar and vanilla to the warming mixture.
5) Temper the egg yolks in another bowl and begin mixing it into the dairy, cooking until it thickens.

6) Set the custard to the side to cool.
7) In a mixer, pour the rest of the heavy cream into the bowl with a touch of vanilla, a bit of berry syrup, and a tablespoon of powdered sugar. Begin whipping!
8) Line the bowls sides and bottoms of the bowls with ladyfingers.
9) Pour the custard into the bowls over the ladyfingers filling it half way.
10) Lay down a layer of ladyfingers on top of the custard.
11) Split the whipped cream between the bowls, filling them the rest of the way.
12) Spread the remaining berry mixture on top of the whipped cream.
13) Decorate with a round ladyfinger in the center if desired.
14) Chill to set and then serve cool.

It was such a haphazardly thrown together dessert, but the layers really came together in a delicious concert of flavors. I can’t wait to actually make a trifle on purpose!

2 thoughts on “I guess you could call it a Trifle”