I don’t make casseroles. I wasn’t really raised on them, and despite having a lot of recipes for them, I don’t make them. However, my coworker brought in a yellow squash casserole to the office that was really good. I asked for her recipe, and then decided to modify it to make it even better (or you know, spicier). It was originally going to be a side dish for dinner, but it ended up just being dinner instead.

DIRECTIONS:
1) Smear a bit of bacon grease in the bottom of a cast iron pan.
2) Slice yellow squash and throw into hot cast iron pan.
3) Let cook for two minutes before adding a cup of water. Cover and let it steam.
4) Chop up the onion and add to the pan. Recover. Let steam until you have finished preparing the rest of the ingredients.

5) Shred pepper jack cheese and put crackers through food processor until crumbly.
6) In a bowl, mix together 1 cup mayo, egg, garlic powder, black pepper, and half the cheese.
7) In another bowl, combine cracker crumbs, 1 T bacon grease, and the rest of the cheese.
8) Uncover vegetables, drain thoroughly, and then stir in mayo mixture and the bread crumbs. Make sure its all incorporated.
9) Sprinkle cracker mix over the entire pan.
10) Bake uncovered in the oven for 20-25 minutes. 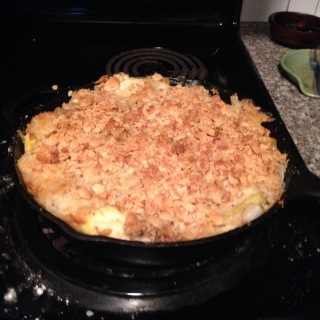 It was so good, that my fiance ate it without any extra hot sauce or spice of any kind! He was actually so looking forwarding to this meal he told me to skip the protein! He then proceeded to eat all the leftovers for lunches.